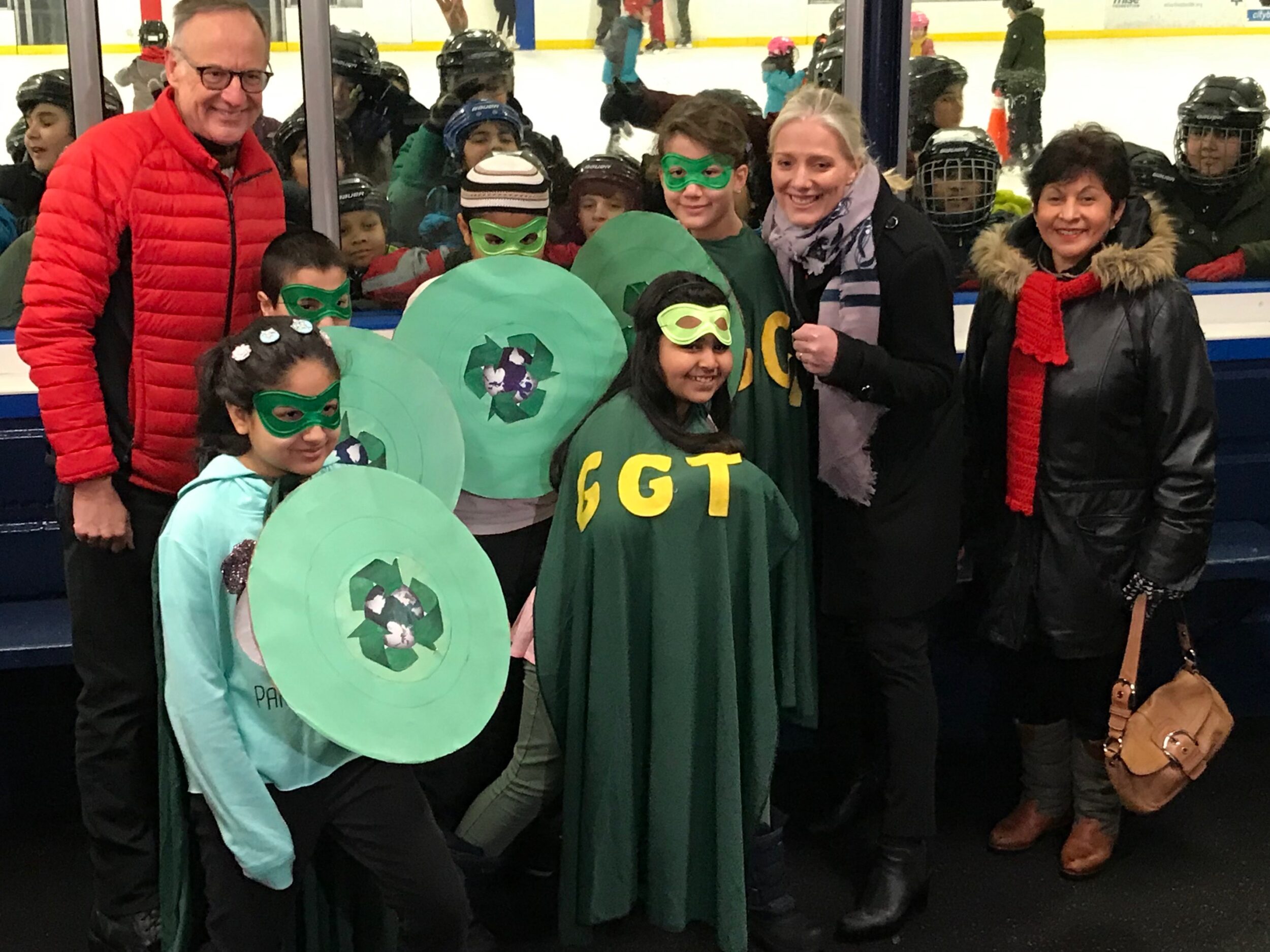 Lisa Porter is a teacher and librarian at Grenoble Public School in Toronto, Ont., working with different classes and collaborating with teachers on inquiry-based projects. She and a group of teachers run the EcoSchool club, which they call the Grenoble Green Team (GGT). Last year, their school received Gold Status certification with the Ontario EcoSchool program. Porter shared some of the highlights from what their eco-club is doing to make their school and community a better place.

On the eco-club at her school

We meet weekly and have divided up the kids into three groups. We’ve got the GGT superheroes —they’ve got capes and masks—they perform at assemblies and their role is to inspire the whole school. They present whatever our theme of the month is for our eco-goal. Last assembly, we had a game show so they made a big wheel and asked the whole school questions about sorting. The Green Team also goes into the classrooms and they model how to sort.

We’ve got another team called the Glam Squad and they do announcements and posters and hands-on stuff. We have two robots and one of them they call Zapbot and he collects batteries. And the other one they called Colourbot because we joined Crayola’s ColorCycle—you can collect your markers and Crayola will pick them up and recycle them.

And the third group is the Data Detectives—they run around and audit. They’re dressed like Men in Black and they give out tickets. They issue “eco-infractions” if they catch a teacher who’s left their lights on or they go into classrooms and if they find that things haven’t been sorted they give a gentle reminder and tell them where things should be going. 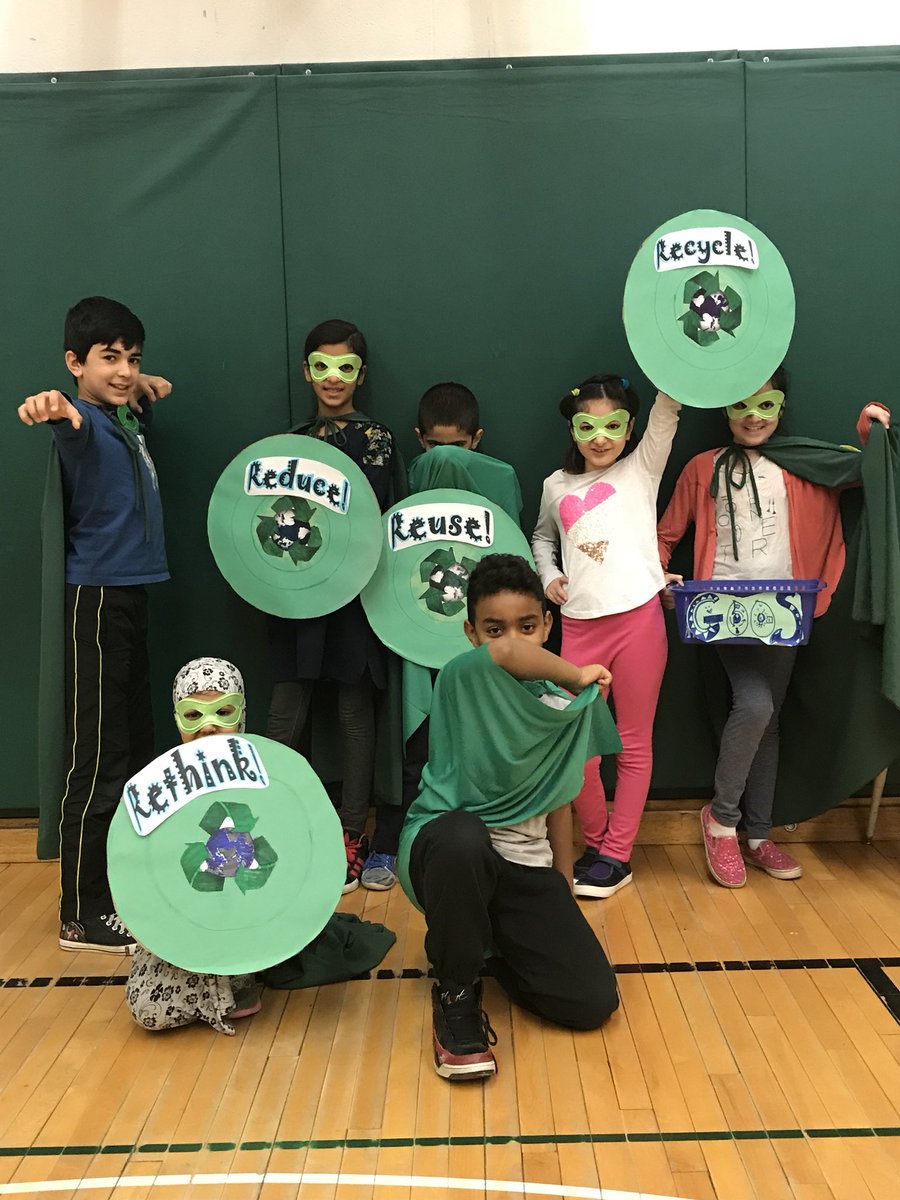 On their visit from the Minister of Environment and Climate Change

We have a community skating rink out behind our field and they had just been retrofitted with solar panels. Minister McKenna was going there to highlight it and announce some of the initiatives coming on the federal level. They reached out and I ended up on the phone with Minister McKenna’s assistant. It was happening literally at our backdoor so the GGT Superheroes came with me and it was great! The kids were really excited when they saw the media. Minister McKenna spent some time talking to the kids and asking them about the initiatives they’re doing at school. For them, it takes it out of our school walls and connects it with what’s actually happening in the real world—that this isn’t just a school activity and that it’s part of something real and necessary. 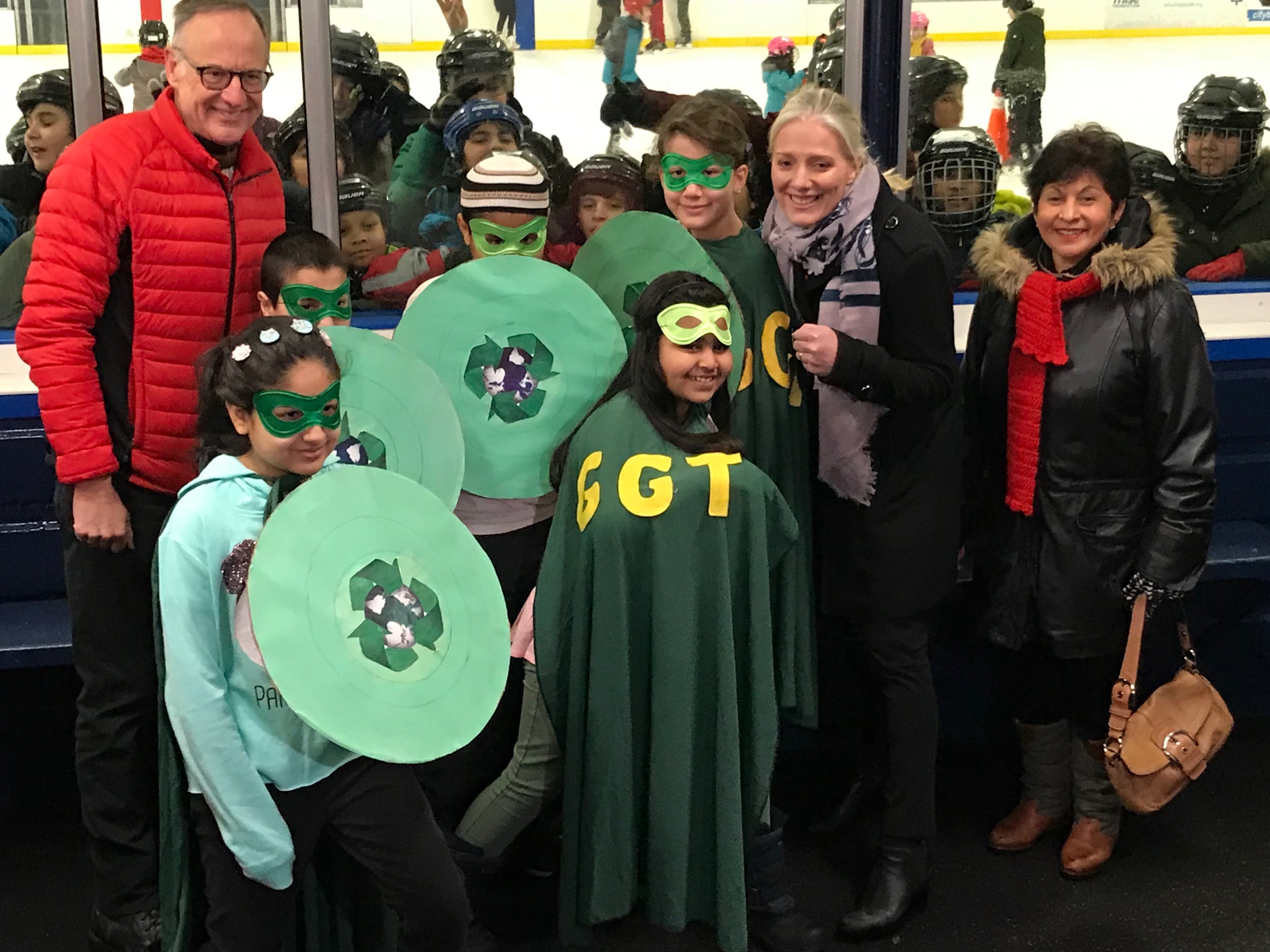 On starting small and cultivating understanding

Right now, we’ve spent a lot of time working on the basics, because we’re having a problem at our school with kids not knowing how to sort waste. About 90 per cent of our kids are ESL, they’re all newcomers. We’re dealing with kids that are totally new to Canada and most of them are new to the concept of recycling. There’s not a culture of stewardship, they’ve never been introduced to the concept of waste reduction or energy reduction at all. We figure that if we teach the kids, they’ll go home and teach their parents. The kids are actually starting to sort properly and the amount of garbage has been reduced significantly and stuff is being diverted into recycling or compost. You can see the change happening. You can hear the kids saying, “That’s black plastic, you can’t put that in recycling!” The culture of stewardship is growing.

In the spring, we’re hoping this year to do vermicomposting, to get the kids working with worms. Last year, we started a garden and we managed to get a canoe donated as part of the David Suzuki Butterflyway Project and we planted butterfly bush and milkweed. And our kindergarten classes all hatched painted ladies, planted flowers, and the eco-team helped them. This year we hope to go a little bit deeper. Every year, we’re adding a little bit more. 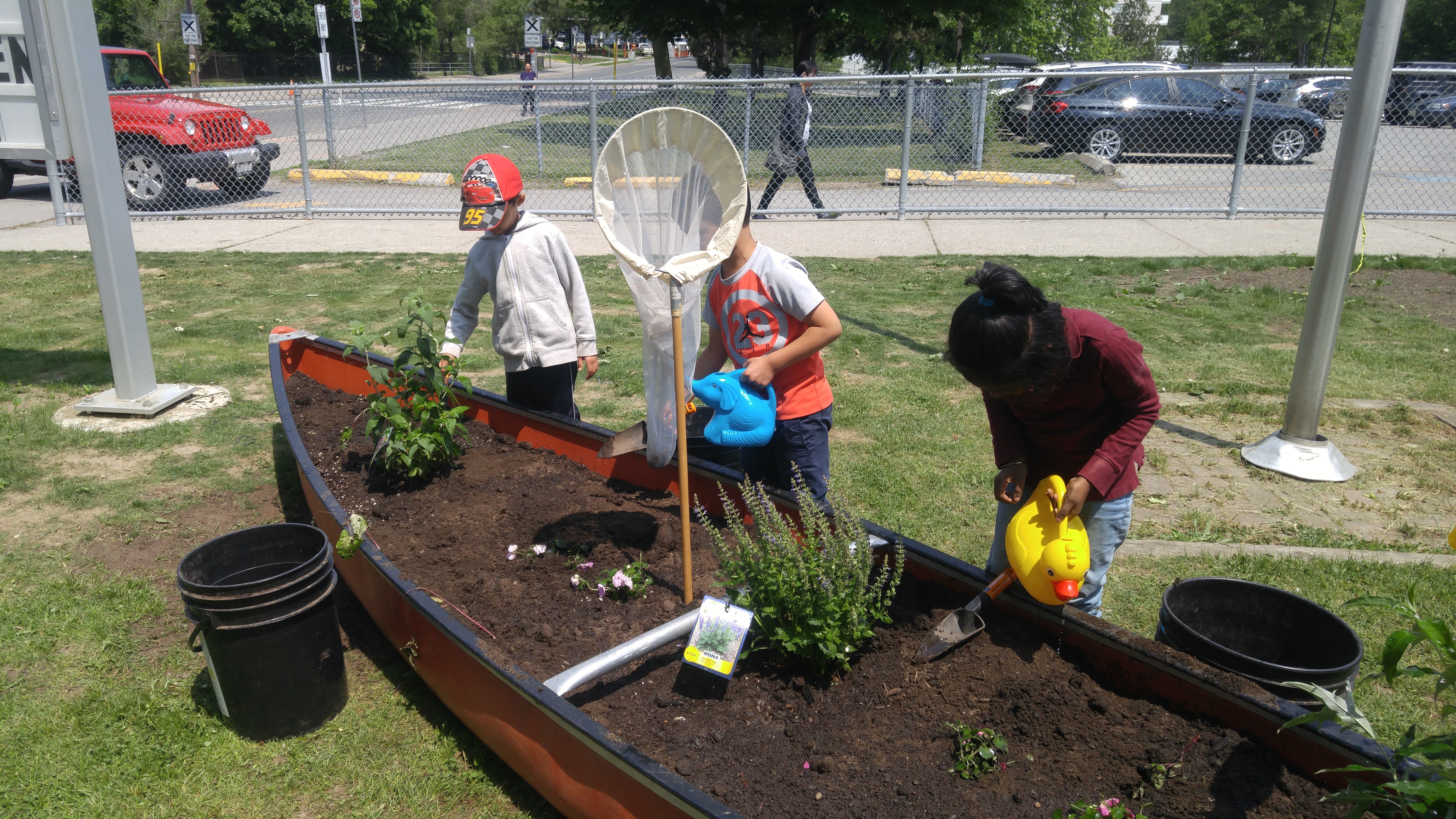 Students from Grenoble P.S. working on their garden as part of the David Suzuki Butterflyway Project. Photo credit: Lisa Porter

On what the kids get out of the experience

The kids love when you empower them with a job that they can do well and that they think can affect change. You don’t have to convince kids, they just naturally care about the environment. And when you explain to them what can happen, show them images of what’s happening to the Earth and what will continue to happen if we don’t change things, they’re just mortified.

Our plan was to take our Green Team and to have ambassadors in the classrooms and have all the kids going home inspired to share it with their families. The kids are so happy to be part of it and they really appreciate this. We do drama, little skits, and they get to be superheroes—it’s a lot of fun! They really love what they’re doing­—they love building things like the robots. We did upcycling, using recycled materials like cardboard and bottles, and they made these life-sized robots. The other big thing is the leadership stuff­—they love being able to put on their costumes and go out in the assemblies and be the spokesperson. They do announcements, sharing information, and they love getting to be the teacher. It’s very empowering and they get to feel confident. I think It’s good for their self-esteem. What happens now is that I’ve got kids beating the door down, asking, “Can we join the eco-team?”