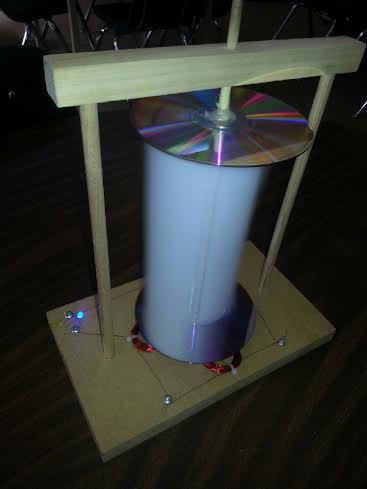 The following blog post was submitted by Herman Chang, a grade 5/6 teacher at Hillview School in Edmonton, Alta. He completed the Windy City Challenge with his students by creating their very own wind turbines. This is his account on how he was able to turn a difficult task like building a wind turbine into an educational opportunity for his class.

Are you looking for a project that will ELECTRIFY your students? Then read on because this is the project for you.

A few summers ago, I met Steve McIsaac, the executive director of Inside Education, at a education energy conference. He showed me a wind turbine he had built. I could tell it meant a great deal to him because he was holding it like a newborn baby and wouldn’t let anyone else touch it. But he did demonstrated how it worked and was kind enough to shared the plans for it.

Oh how I wanted to build this with my students, but I was afraid of the amount of time and effort it would require to get a class organized enough to build a wind turbine.

But this year I was lucky enough to have a parent ask if he could do anything to help in the classroom. I knew he was a mechanic so I gave him the turbine plans McIsaac had given to me and asked him if we could work together to create a project where each student could build one.

I suspect he thought I may had given him an impossible task, but within a week he came back with a working turbine and modifications to make it easier for my students to build. With the simplified blueprints in hand, I began to prepare for the build day.

I outlined how our day would look and prepared the necessary materials. Even though I was sure I had everything ready, I still wasn’t sure if it was going to work. I was plagued by doubts. Would we have enough time? Could the students could handle this type of project? Is it worth the effort?

Soon, our turbine build day was upon us. My grade 5 / 6 class was lucky enough to have Inside Education come do a presentation first. Students learned about electricity, how and where it’s generated, how it gets to us as consumers and, critically, how to be safe around electricity.

After their crash course on electricity the students spent the day building their own turbines. Aided by a small army of parent volunteers, students worked with copper, magnets, drills, zipties, compasses and hot glue to build their turbines. Safety was of course a priority, and though we were prepared with a well-stocked first aid kit, thankfully we didn’t need it.

The students worked hard throughout the day and by the time the bell rang, each of my students had built a working turbine that could generate enough electricity to power a small LED.

It was fantastic. They were incredibly proud of their work and rightly so. Even better, they learned how electricity is created and why it’s important to conserve energy.

Now when I ask myself if it was worth it, I have no doubt the answer is absolutely.

Below are our plans so you can build a wind turbine with your class too.