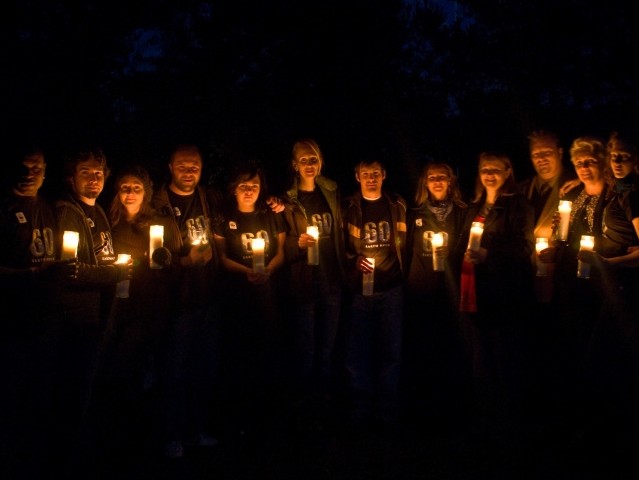 It’s a movement that uses the power of the crowd to protect the planet.

On the last Saturday of March, millions of people across the world switched-off their lights in support of Earth Hour.

The global movement, organized by the World Wildlife Fund, was held on Saturday at 8:30 pm.  For the seventh annual Earth Hour, new monuments and turn-off traditions were tried, and new records were set. Here’s a look at how a few countries from across the world celebrated Earth Hour 2014.

Canada repeated a candle-lit vigil on Parliament Hill in Ottawa at the Centennial Flame in honour of Earth Hour. Toronto Hydro reported that their power usage dropped six per cent during Earth Hour and B.C. Hydro reported a one per cent reduction.

In the nations capital of Edinburgh, some of Scotland’s most famous monuments were switched-off, such as the Edinburgh castle, the Palace at Holyroodhouse, the Scottish Parliament and the Forth Rail Bridge.

Across the Scottish Highlands, a different sort of celebration took place. Along with turning off the lights in many of Scotland’s iconic Highland castles, the Highland Council’s Ranger Service led a nocturnal wildlife walk, a stargazing event, a ghost walk, and art events in the dark.

Singapore’s biggest Earth Hour event took place at Marina Bay, a bay in the southern part of Singapore and to the east of the county’s downtown core. The event featured the launch of Spiderman 2, as well as live music, food and a sustainable dance floor that lit up using the kinetic energy of the dancers to ring in the hour.

An unplugged concert took place on a barge, floating in Budapest’s Danube River.

Pakistan celebratedEarth Hour by engaging its citizens to participate in three challenges. The challenges, the most aware university, the most environmentally conscious city in Pakistan and an Earth Hour digital competition, were held to mark the hour without power.

Cape town won the award for their many green initiatives, including their solar water-heating program.

One Earth Hour event was held at Africa’s greenest hotel, Hotel Verde. Inside the hotel was a night market, where green crafters, artisans, acoustic musicians, and local food producers met to celebrate the planet.

The Eiffel tower was once again plunged into darkness for Earth Hour this year. It was, however, only be turned off for five minutes due to safety concerns. Other monuments, like the Notre Dame and Arc de Triumphe remained switched-off for the entire hour.

More than 200 towns participated in Earth Hour across France.

The main Earth Hour event in Romania took place in Carol Park in the capital of Bucharest, with an unplugged event that featured fire jugglers and other performers. Also, the largest civil building in the world, Parliament Palace in Bucharest turned off its lights.

More than 100 cities and towns across the country celebrated the Hour.